skip to main | skip to sidebar

Is it me or are summers getting hotter?  I'm not sure I buy into this whole Global Warming thing or anything but to me it's just dang hot this summer so far.  In fact it reminds me to pull out my favorite comic of all time... 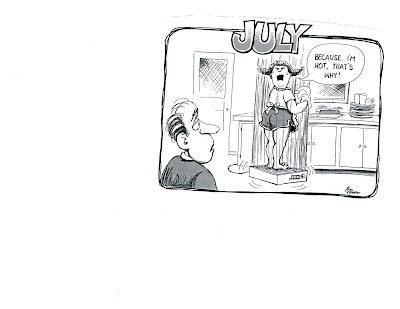 Sorry the scan is a little wonky, but I love the scene!
The garden likes it hot but it also likes rain, which we haven't had much of lately.  I'm having to water a couple of times a week which gets tougher as things get taller.  Speaking of taller-we had to rig up some extra supports for the tomatoes which are now taller than I am. 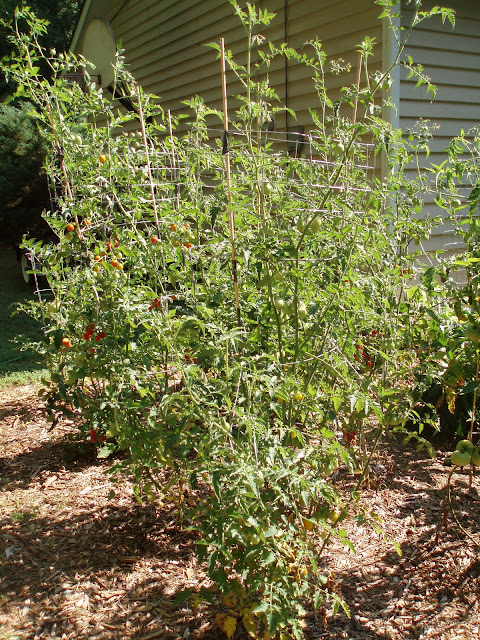 More things that are "tall" include the cages for the cucumbers which is working out really well.  Only real issue is if I let them get too big I have a hard time getting them back through the small holes in the cage, but has only been a problem once so far. 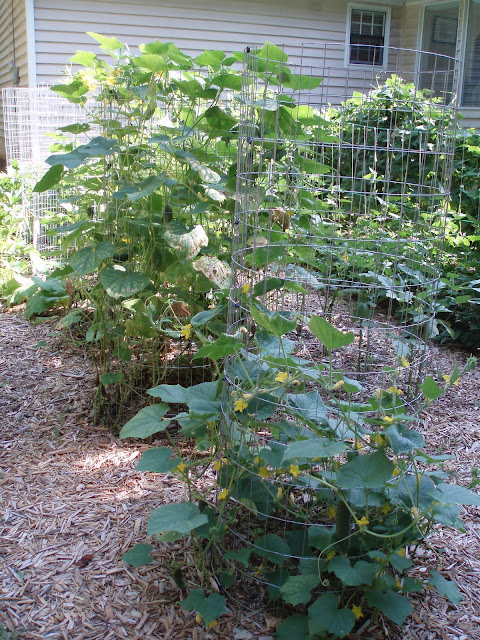 The squash up the cages just didn't work very well in general.  I do like the cages though and probably will use them next year for cucumbers and also maybe eggplant and peppers.  Planting around the cages gives the plants more support instead of having to tie each pepper up with a stick or rod (which was sort of annoying a couple of weeks ago.)  The squash as usual started off like gangbusters and I was giving away squash and zucchini until a couple of days ago...then it happened again...just like last year...Squash Vine Borer. 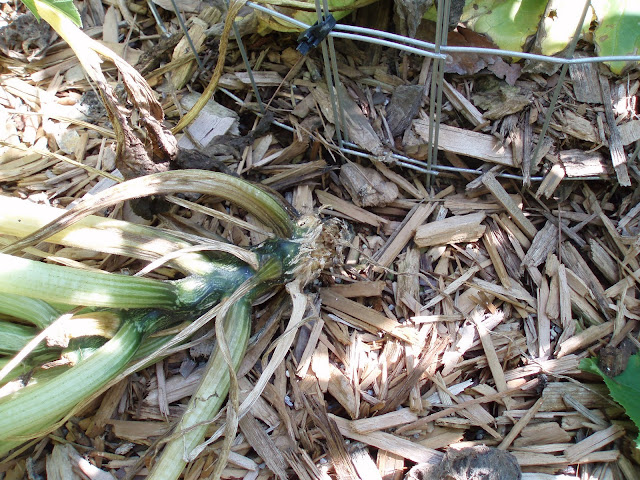 You have this beautiful squash plant and the next day...dead.  Vine blow out.  A small insect lays eggs inside the stem at some point and when they hatch and bust out, it kills your plant in one fell swoop.  Still debating re-planting at this point.  I tried last year without much success.
In other garden-y areas I have the cutest baby watermelons...(note garden hose for size comparison.) 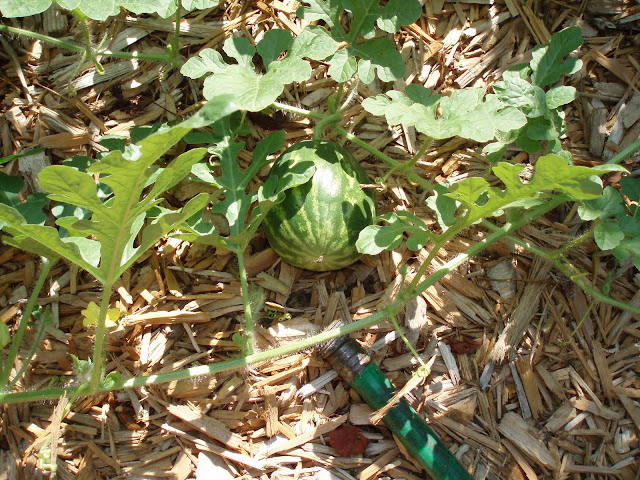 Oddly the green beans still aren't producing beans.  As you can see the vines are HUGE and nice and green but not a sign of a single bean. 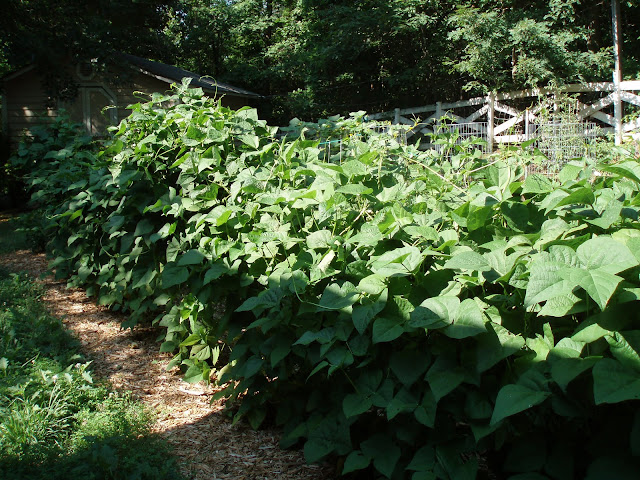 I do have quite a few lima beans coming as well as pink eyed peas... 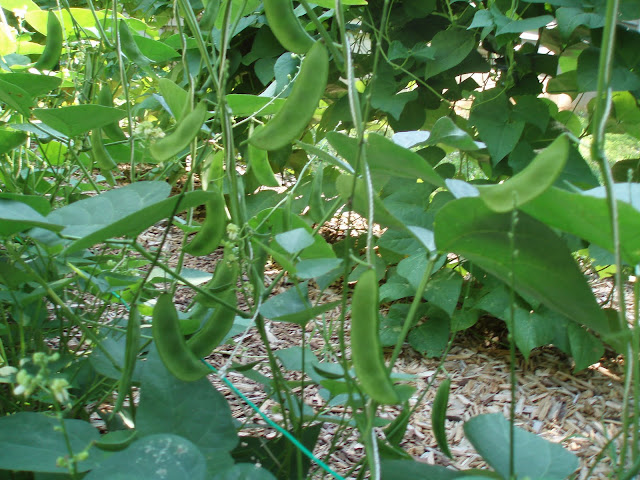 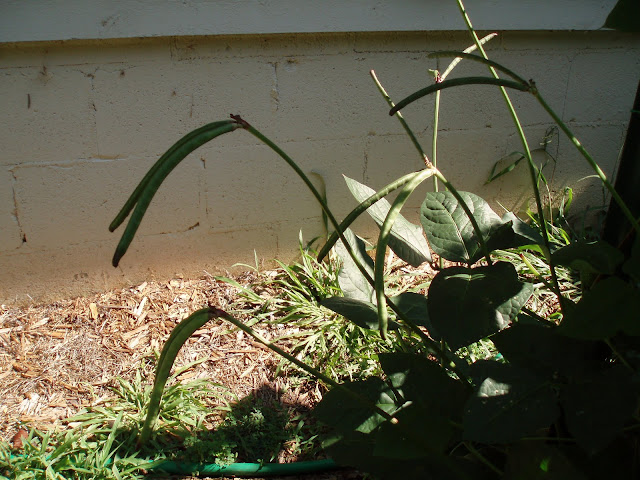 All in all everything is doing fairly well, there are hits and misses as usual.  Leslie isn't complaining about not having any green beans yet ;)  Okra is about to really starting kicking into gear and I'm drowning in tomatoes (which is a good thing.) 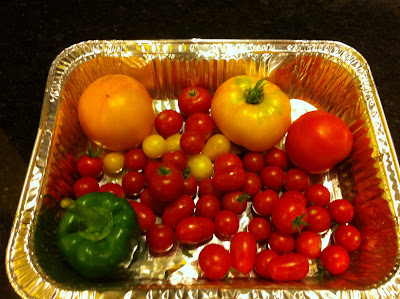 Well enough typing, it's time to go out and do some picking! 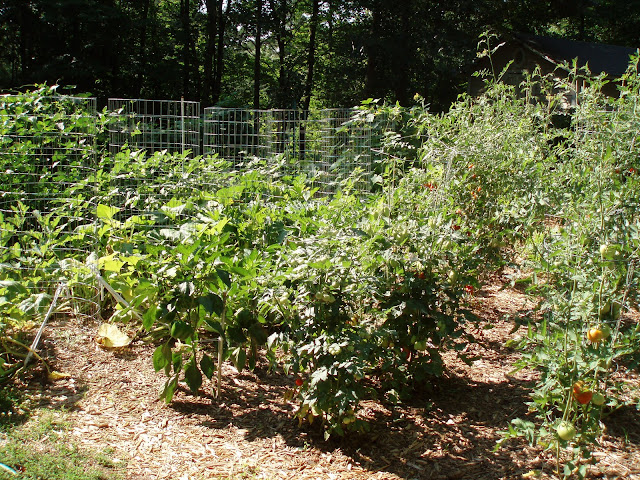 Ok well not fruits more like veggies-but look!!  My first pickins' are in! 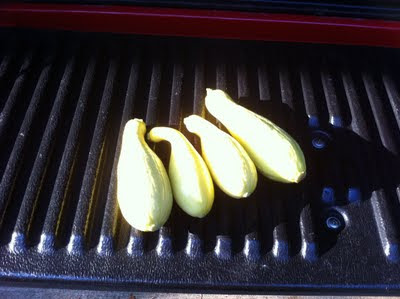 I looked at last year's pictures and realized I picked squash, cucumbers and peppers this same week last year.  But I planted almost 3 weeks later this year so while I have been thinking things sure are growing quickly-they really are!  The lack of rain is worry-some, but I have been watering every couple of days by hand.  It takes some time but I get much more accurate watering on specific plants if I just walk around with the hose for 45 mins.
A few updates on other garden-y things...these were my tomatoes this same week last year... 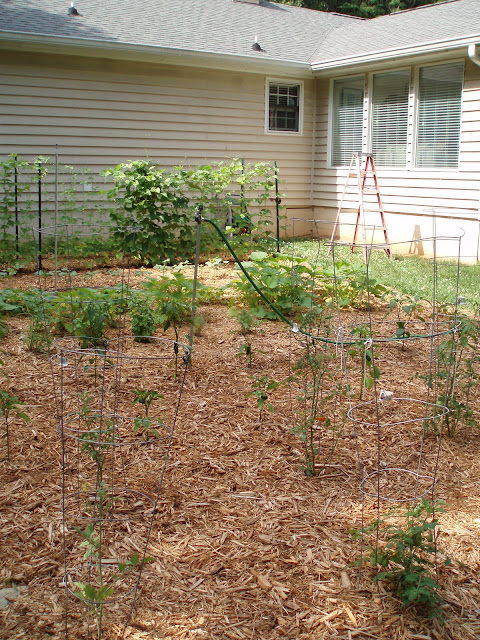 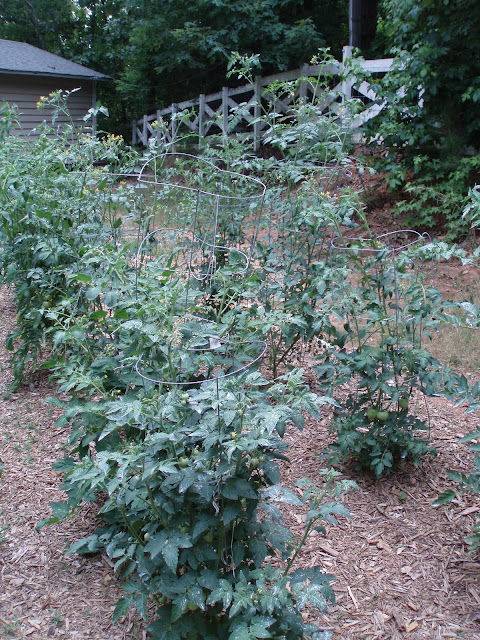 Holy Giant Tomato Plants Batman!
I think the squash have vine borers again.  That's frustrating.  Walter Reeves the garden expert says there isn't much you can do to stop them, other than plant early and hope you are sick of squash by the time they kill your plants (sort of funny huh?)  The cucumbers are growing up their cages perfectly... 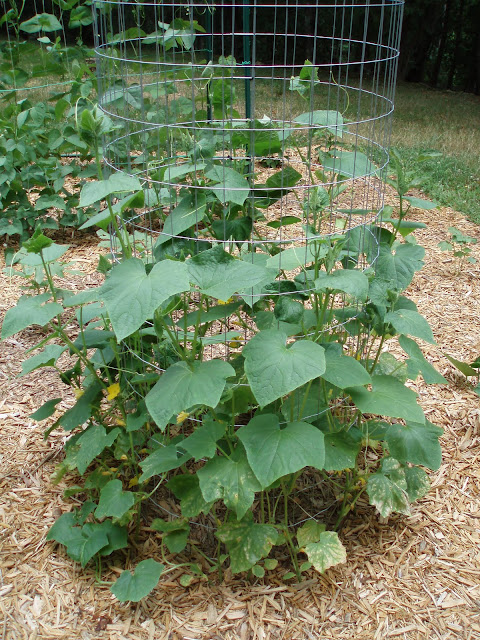 The yellow squash and zucchini not so much, but my intent was to sort of tie them to the cages to encourage them to grow up and to tell you the truth I really haven't had the time and I also haven't wanted to work out there with all of these 90+ degree days...maybe this weekend I'll rope them up... 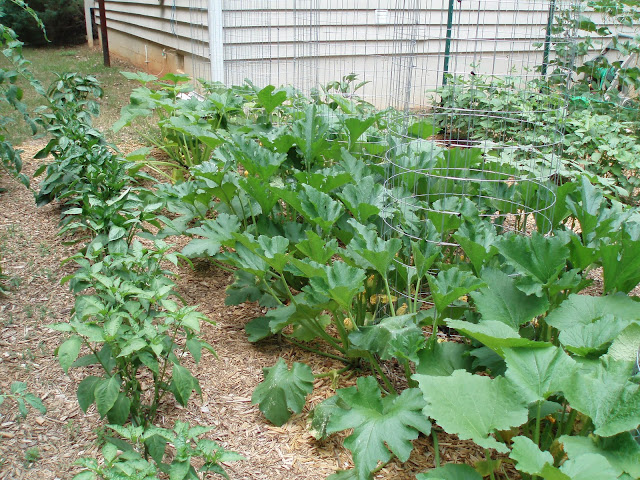 I should have peppers and okra soon... 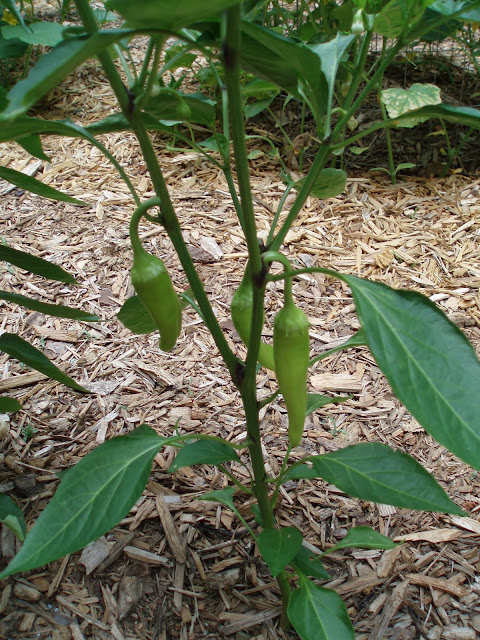 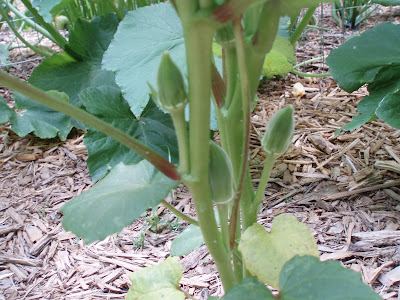 Even though it has been decimated by flea beetles the eggplant are even coming along. 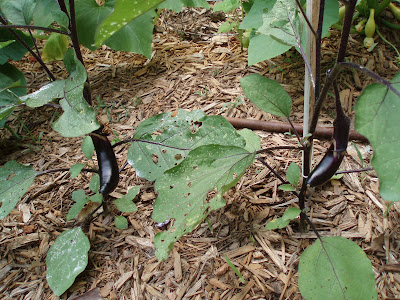 I leave you with a parting shot of green bean alley... 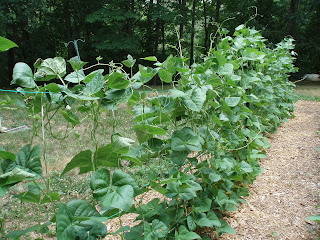 May you all dream of squash casserole for the weekend!
Posted by Queen of Dishing at 3:47 PM No comments:

Howdy folks!  I have some wonderful garden pictures and blog updates to post but due to lack of AC here at the old office where the computer is...no blogging today!  By the way 97 degrees on June 1st is just crazy-my poor garden is a little "wilty"!
Posted by Queen of Dishing at 3:58 PM No comments:

Some Stuff About Me